As our Valentine's Day treat for our readers we have a sampling from an 1880's collection of conversation candies from Riga, NY. Each of these candies was saved by a woman who wrote the year and gifter on the backs of several candies. In the second half of the 19th century, there are candies called "conversation hearts" and "conversation lozenges" which these likely are. 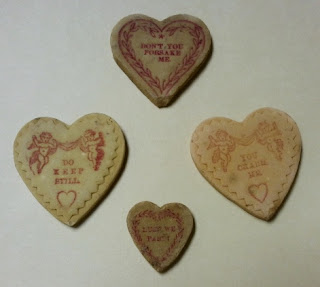 Each hard candy has a message imprinted in red. Some are the heart shapes similar to those we know today. 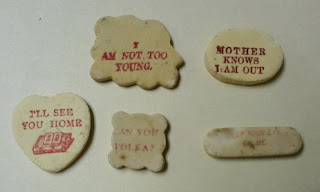 Other shapes include circles, flowers and cresents. 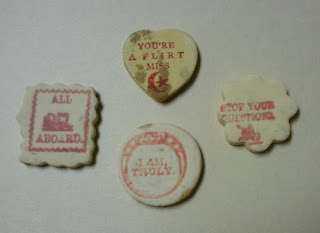 The messages include images in some cases such as these with a train engine, a ring and a cresent moon.

This set of candies shows a raised texture to the surface surrounding the message similar to embossing on paper. 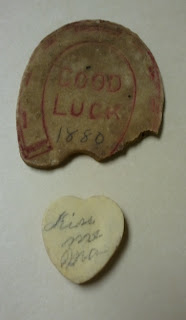 The largest among the hard candies is this horse shoe. The heart below it has no red message stamped on it. Instead, the message is hand written.

﻿
Posted by Genesee Country Village & Museum at 1:00 AM