As our six weeks of want comes to an end with the advent of new spring vegetables, I leave you with a simple cake that would have been useful for using up the butter and eggs that you would have been blessed with at this time of year. 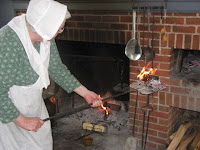 In the village (and elsewhere) it is sometimes known as a 1234 Cake and you'll soon find out why.

In old cookbooks it is referred to as a Cup Cake.

Mix together and pour into a pan and bake for an hour at 350 degrees. You can add any flavoring you wish to this and while it's nice served with fruit it is perfectly acceptable on it's own.

In the Livingston-Bakus house it was made a few weeks ago in the brick oven. To use a brick oven a fire is started in it which burns for approx 3 hours to achieve the correct 350 temp to bake with. The fire is then removed entirely as the bricks are hot enough to bake the cake on their own.

People today are still making the Cup Cake (1234 Cake). It is almost laughable that chefs from Paula Deen to Alice Waters, have versions of the 1234 cake in their cookbooks as it's a well known old fashioned recipe!

Note-This weekend in the Livingston-Bakus Kitchen we will be doing a tasting for visitors of rice pudding, another way in which cream and eggs would have been used at this time of year.
Posted by Genesee Country Village & Museum at 11:07 PM